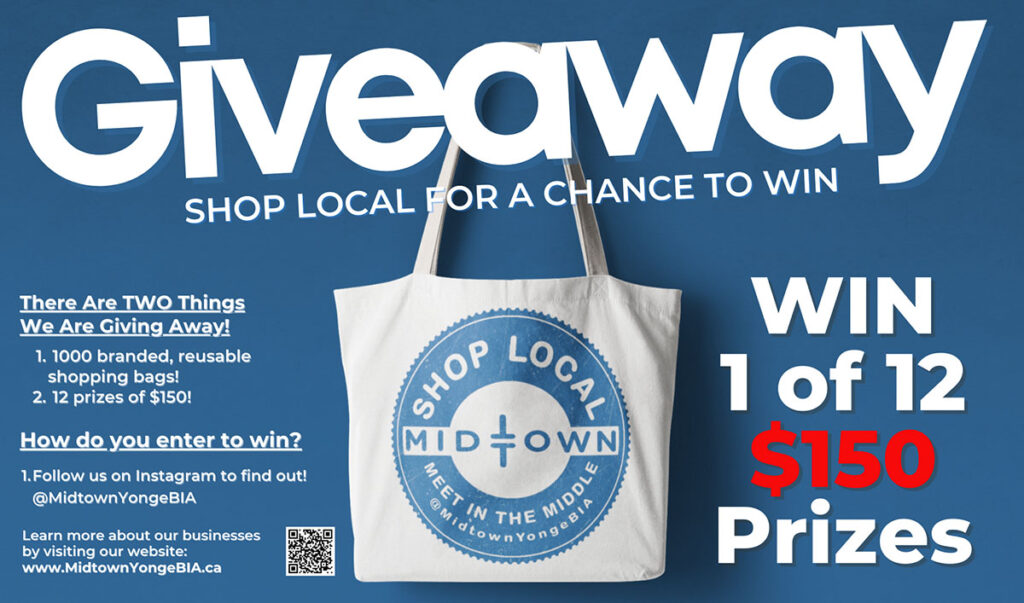 The Cash Giveaway Contest (the “Contest”) and these Official Rules are governed, construed and interpreted under the laws of the Ontario and Canada. Valid only to legal Canadian residents (excluding Quebec) who are eighteen (18) years of age and older at time of entry. All federal, provincial, local laws and regulations apply. Void where prohibited, taxed, licensed or restricted by law. Discount This  Contest begins June 7th, 2021, and ends July 2nd, 2021 (“Contest Period”).

Contest SPONSOR. This Contest is sponsored and administered by the Midtown Yonge BIA (the “Sponsor”). Participants agree to be bound by these Official Rules and the final decision of Sponsor.

All entries and their content become property of Sponsor and will not be returned. All entries submitted will be used for the purpose of selecting the Prize Winners as described in these Official Rules.

If a prospective Prize Winner is found ineligible or fails to comply with these Official Rules, his/her claim to a prize is forfeited and an alternate entry can be randomly selected.

The Prize Winner will be notified by e-mail on or about June 12th, 19th, 26th and July 3rd. The Prize Winner will have fifteen (15) business days to claim their prize. Prize winner must sign and return an affidavit of eligibility and liability/publicity release within ten (10) business days of notification. If a Prize notification is refused or a Prize remains unclaimed for over 15 business days a disqualification will result and an alternate winner may be randomly selected. There is no substitution for Prize or portion thereof. The prize is not transferable or assignable. The Prize Winners will be fully responsible for any and all federal, provincial and local taxes if any.

GENERAL CONDITIONS. The Sponsor make no warranties, express or implied. Employees and their immediate families members (defined as spouses, parents, children and legal dependents – including foster and step family members, grandparents, grandchildren, brothers and sisters) or person(s) living in the same household of an employee of Sponsor or Sponsor’s officers, directors, agents and independent contractors are not eligible to enter the Contest.

Notwithstanding the privacy statement and policy, if a person is selected as a Prize Winner and accepts the Prize, each Prize Winner agrees, except where prohibited by law, to grant Sponsor and their parent companies, subsidiaries, affiliates, licensees and agents the right to use his/her name, visual and audio likeness, for any purpose, including but not limited to any commercial or publicity purpose, in perpetuity and throughout the universe, in any and all media now known or hereafter devised, without additional compensation or consideration.

LIMITATIONS OF LIABILITY. By entering, participants, their agents, assigns and successors release Sponsor and their respective parent companies, trustees, subsidiaries, affiliates, licensees, directors, officers, employees, agents, and independent contractors from any and all liability for any costs or expenses resulting from entry in the Sweepstakes and from any and all liability whatsoever, including, without limitation, for any injuries, death, losses or damages of any kind caused by or in connection with the Prize or resulting from acceptance, possession, quality, use or misuse of any prize, or any portion of the Prize, or parts thereof. All entrants further agree that in the event of any third party claims, damages, losses, injuries or death arising from or relating to the Contes, and any Prize Winner’s use of the Prize, they will indemnify Sponsor from any and all such claim, including solicitors’ fees related thereto.